Rhodoquinone in bacteria and animals: Two distinct pathways for biosynthesis of this key electron transporter used in anaerobic bioenergetics 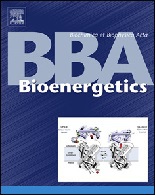 Rhodoquinone in bacteria and animals: Two distinct pathways for biosynthesis of this key electron transporter used in anaerobic bioenergetics

The terpenoid benzoquinone, rhodoquinone (RQ), is essential to the bioenergetics of many organisms that survive in low oxygen environments. RQ biosynthesis and its regulation has potential as a novel target for antimicrobial and anti-parasitic drug development. Recent work has uncovered two distinct pathways for RQ biosynthesis which have evolved independently. The first pathway is used by bacteria, such as Rhodospirillum rubrum, and some protists that possess the rquA gene. These species derive their RQ directly from ubiquinone (UQ), the essential electron transporter used in the aerobic respiratory chain. The second pathway is used in animals, such as Caenorhabditis elegans and parasitic helminths, and requires 3-hydroxyanthranilic acid (3-HAA) as a precursor, which is derived from tryptophan through the kynurenine pathway. A COQ-2 isoform, which is unique to these species, facilitates prenylation of the 3-HAA precursor. After prenylation, the arylamine ring is further modified to form RQ using several enzymes common to the UQ biosynthetic pathway. In addition to current knowledge of RQ biosynthesis, we review the phylogenetic distribution of RQ and its function in anaerobic electron transport chains in bacteria and animals. Finally, we discuss key steps in RQ biosynthesis that offer potential as drug targets to treat microbial and parasitic infections, which are rising global health concerns.
2.11.0.0
2.11.0.0
2.11.0.0
2.11.0.0