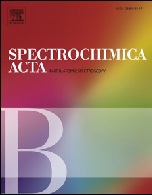 A flow injection photochemical vapor generation atomic absorption spectrometry (FI-PVG-AAS) system was developed for selenium determination. The variables of influence of the photochemical generation process were evaluated and optimized. Sample already reduced to the Se(IV) state and mixed with the photochemical reagent (1.5% w/w HCOOH) was irradiated for 3 s. Selenium derivatives were transferred to an externally heated atomization cell by an argon-hydrogen mixture and selenium determined at 196.0 nm. Nitrogen was used as the carrier of the flow injection system. Nitrate is one of the most relevant interferents for the photochemical generation process; it is a very frequent concomitant as nitric acid is added for sample digestion or preservation. Hence, its removal before the vapor generation stage was studied. It was found that up to 3.0% w/w HNO3, it can be eliminated in the reduction stage of Se(VI) to Se(IV) with hydrochloric acid. For higher concentrations (up to 21% w/w HNO3), prior to the reduction step, the addition of 40% w/w H2CO and evaporation almost to dryness was successful for the abatement of the interference. The performance of the method was studied and its applicability evaluated with a Trace Element in Water Certified Reference Material (24.3 μg L−1 – Se, 2.8% w/w HNO3) and a spiked rice-flour microwave-assisted digest (103.1 μg L−1 – Se, 18.5% w/w HNO3).
2.11.0.0
2.11.0.0
2.11.0.0
2.11.0.0