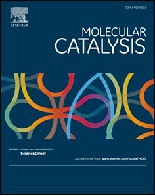 Biocatalysts have emerged as promising tools, with aldolases being among the most employed. Unfortunately, the features of their active sites that modulate the mechanistic details have been poorly assessed. Here, the electronic and structural factors associated with the substrates binding and catalytic mechanism of rhamnulose-
1-phosphate aldolase (RhuA) from E. coli are computationally analysed. The results allowed us to furnish a holistic view of the RhuA’s entire turnover cycle. The active site bears three pockets that anchor different moieties of the substrates: L-rhamnulose-1-phosphate (R1P), dihydroxyacetone phosphate (DHAP) and (S)-lactaldehyde (LLA). The results predict a 5-step catalytic mechanism, being the CeC bond breaking (Ea =24.2 kcal mol−1) and the DHAP deprotonation (Ea =22.0 kcal mol−1) the rate-determining steps for the retro- and aldolic
reactions, respectively. The residues E117, E171′, G31 and N29, and the Zn2+ cofactor, play a major role in stabilizing the correct substrates’ orientation, securing the stereocontrol at C4. Our findings suggest the presence of two acid/base catalytic residues, E117 and E171′, the latter of which being also involved in assisting the CeC
bond formation through a concerted protonation of the transition state.