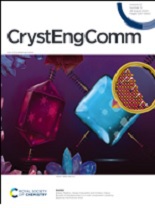 A new imidazolium hydrated salt (DCF-IMI-H2O) of the nonsteroidal anti-inflammatory drug Diclofenac (DCF) was synthesized by solvent evaporation. This salt was fully characterized by X-ray diffraction (SCXRD, PXRD), infrared
spectroscopic (FT-IR) and thermal analysis (TGA, DSC, HSM) techniques. The salt formation is driven by deprotonation of the drug's carboxylic group, with proton transfer to the nitrogen atom of the imidazole ring. The water molecule plays an
important role in the 3D arrange observed in the crystal lattice, acting as a bridge between adjacent DCF and coformer molecules. The DCF-IMI-H2O exhibits an improved solubility profile when compared with the pure form of DCF, and similar
values when compared with sodium and potassium salts. This new salt proved stable under 75% relative humidity for one week and is stable after six-months storage at room conditions. The study of its thermal stability showed that a dehydration
process starts at around 45 ºC, leading to the probably formation of an unstable anhydrous form, which melting around 92°C. Spectroscopic studies showed that most of the salt is ionized when in amorphous state (liquid). These behaviors
features the new compound as an ionic liquid (IL), i.e., organic salt with melting point below 100 ºC. Pharmaceutical ILs have been increasingly exploited in the past few years aiming improved properties regarding drug solubility, formulation and delivery (topical, transdermal and oral).
2.11.0.0
2.11.0.0
2.11.0.0
2.11.0.0
2.11.0.0