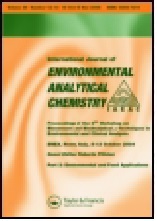 Chlorpyrifos is one of the most employed insecticides worldwide. It is moderately persistent in the environment. It degrades to 3, 5, 6- trichloro-2-pyridinol (TCP), the metabolite of toxicological concern to both human health and the environment. In the field, pesticides point contaminations occur during the operation of the application machinery. Biobeds made up of a biomixture containing straw, peat, and soil have been successfully developed to minimise these incidents. The retained pesticides are degraded by the microorganisms in the biomixture. Although the dissipation of chlorpyrifos in different biobeds has been studied, the fate of TCP received scarce attention. Biodegradation in specific bioreactors can only be assessed if it is evaluated through proper analytical methods. In this work chlorpyrifos and TCP dissipation in biobeds was studied with a previously fit for purpose analytical method. The lyophilised biomixture was extracted with ethyl acetate in an aqueous solution of NaCl and sodium tetraborate. The extract was cleaned up with alumina. Chlorpyrifos was determined by gas chromatography with electron capture and mass spectrometer detectors and TCP by liquid chromatography coupled to tandem mass spectrometry, using the negative Multiple Ion Mode. Recoveries of the two analytes, up to 2 mg kg−1, were between 70% and 113% with RSDs below 16% and RSDwR below 19%. Further TCP confirmation was evaluated through Enhanced Product Ion mode for each ion. The dissipation of both analytes in laboratory biobeds inoculated with Abortiporus biennis using two different types of Uruguayan soils was assayed. Both bioreactors were able to dissipate the compounds after 60 days following different dissipation kinetics. Similar results were obtained after scaling up in a biobed under field conditions.
2.11.0.0
2.11.0.0
2.11.0.0
2.11.0.0