Evaluation of essential and potentially toxic elements in popcorn: study of cooking effect and in vitro bioaccessibility 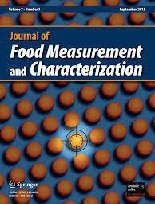 Evaluation of essential and potentially toxic elements in popcorn: study of cooking effect and in vitro bioaccessibility

The influence of the cooking method on the elemental composition of popcorn, prepared according to the way it is consumed, was evaluated. Arsenic, calcium, cadmium, copper, iron, lead, magnesium, manganese, potassium, selenium, sodium and zinc levels were determined using atomic absorption spectrometry. Results showed that the losses after cooking varied considerably (2.9%–48.3%) depending on the element. A bioaccessibility study of cooked samples was also performed, using an in vitro approach. The most bioaccessible elements were sodium (77.4%–88.5%) and potassium (63.7%–81.8%), while considerably low values were observed for calcium (5.5%–13.7%) probably due to strong interactions with the matrix. The contribution to the Recommended Dietary Allowance was evaluated, finding an important coverage for selenium (36.7%– 50.0%). Positive Pearson correlation coefficients were found for the pairs Cu/Fe, Cu/Mn, Fe/Mn Cu/K, Fe/K, K/Mn which can be explained by natural physiological mechanisms of the plant. To the best of our knowledge, this is the first study of bioaccessibility of essential elements in Uruguayan popcorn
2.11.0.0
2.11.0.0
2.11.0.0
2.11.0.0