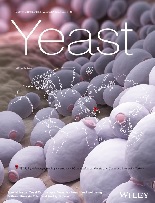 Benzenoids are compounds associated with floral and fruity flavours in flowers, fruits and leaves and present a role in hormonal signalling in plants. These molecules are produced by the phenyl ammonia lyase pathway. However, some yeasts can also synthesize them from aromatic amino acids using an alternative pathway that remains unknown. Hanseniaspora vineae can produce benzenoids at levels up to two orders of magnitude higher than Saccharomyces species, so it is a model microorganism for studying benzenoid biosynthesis pathways in yeast. According to their genomes, several enzymes have been proposed to be involved in a mandelate pathway similar to that described for some prokaryotic cells. Among them, the ARO10 gene product could present benzoylformate decarboxylase activity. This enzyme catalyses the decarboxylation of benzoylformate into benzaldehyde at the end of the mandelate pathway in benzyl alcohol formation. Two homologous genes of ARO10 were found in the two sequenced H. vineae strains. In this study, nine other H. vineae strains were analysed to detect the presence and per cent homology of ARO10 sequences by PCR using specific primers designed for this species. Also, the copy number of the genes was estimated by quantitative PCR. To verify the relation of ARO10 with the production of benzyl alcohol during fermentation, a deletion mutant in the ARO10 gene of Saccharomyces cerevisiae was used. The two HvARO10 paralogues were analysed and compared with other α‐ketoacid decarboxylases at the sequence and structural level.
2.11.0.0
2.11.0.0
2.11.0.0
2.11.0.0
2.11.0.0